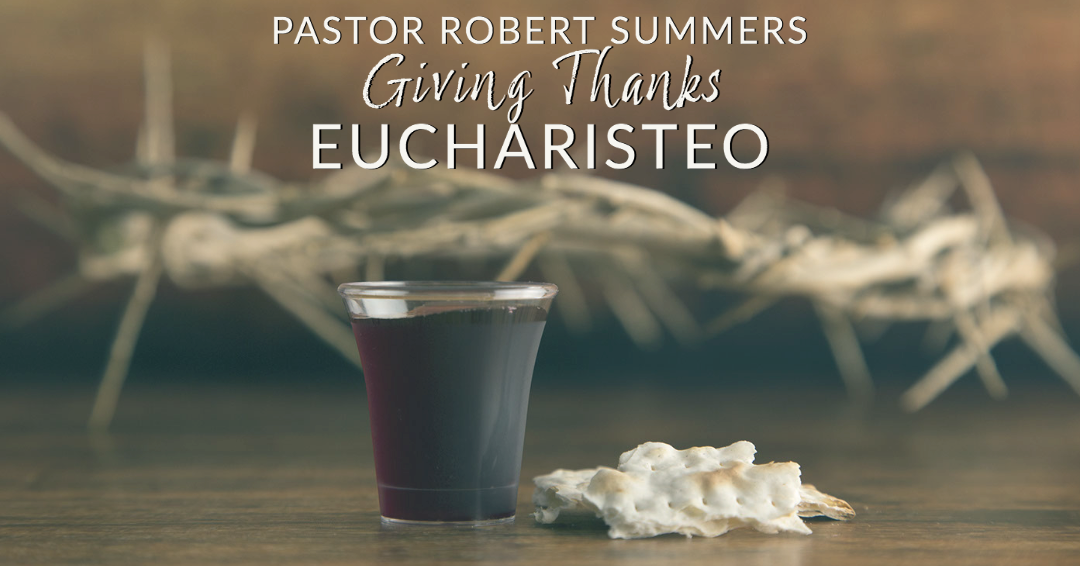 Jesus took the loaves, and when He had given thanks He distributed them to His disciples…John 6:11 NKJV
…and whatever you do in word or in deed do it all in the name of the Lord, giving thanks. Colossians 3:17 NAS
…in everything give thanks, for this is the will of God in Christ Jesus for you. 1 Thessalonians 5:18 NKJV

Giving thanks  eucharisteo (yoo-khar-is-te-oh) G2168 from G2170, related to G2127, to speak graciously, well, express gratitude, to be thankful, say blessing/thanks, actual show of thankfulness, say grace. Eucharisteo is used 39 times. Of these references, 11 refer to partaking of the Lord’s Supper. The word is used for giving of thanks 26 times. For simply being thankful, it is used two times.

Being thankful is a virtue that clearly marks a true Believer, along with love and faithfulness. Jesus was known and identified by the way He demonstrated thankfulness in the breaking of the bread. Paul also followed the Lord’s pattern while on board the ship caught in the storm: “..he took bread and gave thanks to God in the presence of them all, and when he had broken it he began to eat.” Acts 27:35 NKJV

Thankfulness is also the principal theme of the Psalms, with over 30 admonitions for thanksgiving

Ten lepers approached Jesus pleading to be made whole. Jesus healed them all in the miracle of their showing themselves to the priest. However, it was soon obvious that not all of them bothered to return and thank the Lord. In fact, only one, a Samaritan, came back to thank the Lord for his healing. “Where are the other nine?” Jesus inquired. “Did not I heal ten?” Alas, they had to hasten off to reenter polite society. They must have joined the popular Club Nine, that ungrateful cult of folk who never bother to show gratitude.

Man’s original sin in the Garden was gross ingratitude. He should have been grateful. He enjoyed pleasurable walks in the evening with God Himself. He received love and care. He could eat the delicious fruit of every tree—save one. In Paradise, all was his. He lacked nothing. Yet he succumbed to the temptation of wanting more, to be even as he supposed God’s equal! Ingratitude was the sin that led to pride and deception. And the Fall.

Paul issued his indictment of the Roman world beginning with the root cause of their sin: neither were they thankful. Romans 1:21

The Lord’s Supper is often referred to as the Eucharist. This is because partaking of this memorial sacrament demands a pure and thankful heart. The Eucharist or Communion, looks back to the cross and the Lamb of God. It is a remembrance, or memorial, which fulfills the Feast of Passover, celebrating deliverance by the blood of the Lamb. It also looks forward to breaking bread anew in the Kingdom of our Father. Jesus asks us to give thanks and remember His sacrificial death at Calvary by sharing Holy Communion “till He comes.” 1 Corinthians 11:26 NKJV