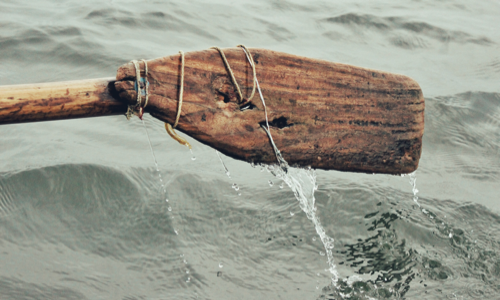 Saved sozo – sode-zoe (Strongs 4942) to save, to rescue, heal, cure, preserve, keep safe and sound. Related words: soteria – so-tay-ree-ah (Strongs 4992) salvation, spiritual wellbeing, safety, preservation. Soter – so-tare (Strongs 4990) savior
“And she will bring forth a Son, and you shall call His name Jesus, for He will save His people from their sins.” The angel of the Lord to Joseph in Matthew 1:21

Back when my older brother Don and I were students in a Houston area high school, our classmate Jimmy built a small river boat as a wood shop project. He hurriedly assembled it and decided to do a trial launch in Lake Houston. We went along to help row. Putting in at the ramp near the dam, we sat out to row the two miles distance across the water. The evening was cool, with an autumn breeze. We were making good progress, paddling.

Out in the middle of the lake, we suddenly realized we were in trouble. The little craft was seriously leaking. It was taking on water faster than we could bail it out with a coffee can. Jimmy confessed he had hurried the construction by not following the class instructor’s direction. He was supposed to clamp-glue the joints before screwing them together. The wet boards now had swelled open. What was worse, we foolishly had failed to bring life preservers. Also, we could see we were the lone boat on the lake.

Troubles worsened. Waves began splashing over the low sides. Without warning, a swell rolled right over the boat and she sank. We were now treading cold water in our clothes. The sinking vessel resurfaced upside down. We clung to its hull in desperation. A north wind began to blow us slowly toward the noisy spillway.
For high school guys, we weren’t very spiritual. But believe me—we prayed! We recommitted our lives to the Lord. Some even swore off cigarettes and cussing. Seriously, we called on God.

Miraculously the wind shifted back around. We were now drifting toward the wilderness far shore. After nearly an hour in the water, we espied a lone powerboat coming toward us. We signaled for help by waving T-shirts. The craft headed toward us as we yelled for help. The boat pulled up beside our upside-down hull. It was piloted by a large skipper with a small lad seated opposite. “Looks like you boys need help,” the grinning man spoke in a voice which somehow sounded familiar.

In an instant we had clambered aboard the bright, dry boat Our rescue skipper was welcoming us aboard when we realized he was none other than the familiar voice of Richard Peters, radio’s popular fishing and water sports announcer heard every morning at 7:15 am.

Richard Peters of the Houston Power Boat Squadron “just happened” to be on the lake that evening testing a new freshwater model. He lectured us all the way back to the launch ramp about water safety. We didn’t mind. We were safe. We would be the subject of his radio show the next morning. But we were saved. God and Richard Peters had saved us from a watery grave. Saved: Sozo!
Every man is like we were, drowning in the sea of confusion, condemned to a cold grave. But God! He is ready to save. To rescue. Whoever calls on the name of the Lord shall be saved. Sozo! Real sozo.

From “Speak These Things! 100 Powerful Words of the Gospel” – a new study by Robert Summers